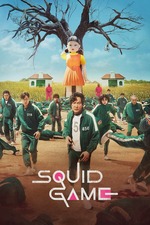 A brilliant, but slightly questionable entry into the death game genre that is nonetheless deserving of its current phenomenon status. It utilizes all the tropes very well and perfectly understands that the primary terror of these games doesn't come just from witnessing a lot of death, but from watching previously good people become desperate for survival and lose grasp of their moral compasses. There's also some effective juxtaposition, such as frequent bloodshed occurring against a backdrop of vibrant, childlike set design and a notable use of Fly Me to the Moon. The musical score is also great and the three leads give career-defining performances.

As for the complaint that this isn't a very layered critique of capitalism, I agree, but I don't necessarily think that's a flaw. The allegories and themes are extremely unsubtle, which works for a show that is clearly trying to be something with mass appeal. Perhaps I'm being too forgiving, but this reminds me of the media I enjoyed when I was around the age of 13. That media wasn't exactly complex, but it was a good stepping stone for me when it came to thinking about my feelings and the world I live in. Similarly, I think that a lot of young teenagers are going to watch this (many already have) and start questioning whether or not capitalism is the right economic system as they have been conditioned to believe.

However, there are some slight conflicted feelings I have, mainly to do with episodes 7-9. First, there is a twist in the last episode that came off incredibly forced. The episode as a whole was doing an excellent job simply portraying the aftermath of the games and I think I would've liked the conclusion more if it just continued through that narrative. Now, everyone has criticized the VIPs, so I have to offer my view too. As someone who grew up with Bollywood movies, I always found myself wincing whenever a white character would have a role in the story because the actors would, for some reason, almost always be awful. That's the same problem Squid Game has, the VIPs are mostly white actors in a non-American show and their acting can come off as incredibly phoned-in. Also, one of the VIPs is the only gay character in this show and he just so happens to be a creepy, old predator.

Anyways, it's a shame that there was a bit of a quality dip from episode 7 and beyond because episode 6 is incredible and the peak of the show. Overall though, this was an imperfect show that didn't say anything particularly revolutionary, but I can't deny that I was intrigued and in awe at how its message was said. Netflix will definitely capitalize off of its status, so I'm expecting a second season.