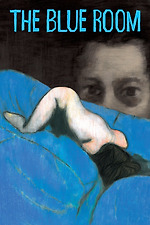 I'll start my review off by admitting that I am biased towards Mathieu Amalric, he's my favorite actor. However I understand the criticisms.
Based on the book by Georges Simenon, we follow the story of Julien Gahyde, a family man who has immersed himself into a passionate affair with the local pharmacist's wife (Esther Despierre). What starts out as pillow talk takes a dark turn when Esther's obsession and instabilities causes her to commit a crime which we as the audience watch unfold with flashbacks of Julien's life a few months previous to his arrest, and through his side of the story he's explaining to the judge after he is taken into custody.
With a run time of 76 minutes, this movie somehow feels long. I chalk it up to all the small details that are thrown at us, and are repeated..... constantly. I found this frustrating, but then Julien starts popping off at the judge about the same thing, so I wonder if that was intentional.
With the atmosphere of the film, and the reaction of the French public towards the crime that was committed, you would think that the crime was intense, however, this isn't Fatal Attraction, so no boiled bunnies.
All in all, while I enjoyed the film, I see it's faults, it's a nice addition to the erotic thriller genre, and gets the general point across.
Stay faithful, because people are crazy.