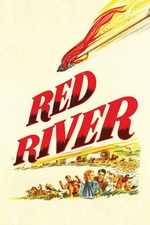 Of all the forced happy endings found in all the Hollywood classics I’ve ever seen, this one annoys me the most. There’s just been too much pain leading up to it. Too much resentment boiling for far too long. When two men are so far down the path of hate somebody has to die. I don’t buy for one second that a stern talking-to by a plucky young lass is gonna do much to prevent the inevitable bloodshed.

People are fond of pointing out that John Wayne wears a white hat in the opening scenes, and switches to a black hat as an older man—he begins as a hero and lives long enough to become the villain, so to speak. But the truth is he’s a villain straight from the start; a violent, greedy, self-righteous robber baron in the making. He abandons a wagon train full of people who were counting on his gun for protection; leaving his intended bride to die in the process. He murders a man over some land to which he has no reasonable or legal claim. When establishing his brand, he refuses to even consider giving his two partners an even share. He does all this while still wearing the white hat. This is not a good man who has allowed himself to be corrupted by greed; corruption and greed are his very nature. There’s no redemption for such a person—no matter how much he secretly loves his surrogate son.

Montgomery Clift, on the other hand, would seem to represent the next phase in the evolution of the frontiersman; equally capable of standing on his own two feet and taking on all comers, but not possessed of the same “might makes right” attitude. It’s no coincidence that he meets his love interest by saving her wagon train from an Indian attack, just as Wayne had earlier abandoned his woman to die under similar circumstances. When he takes the herd away from Wayne, it’s only because he believes it’s in the interest of the greater good for the group—Wayne included. On a philosophical level, the conflict between the two is nothing short of a fight between individualism and collectivism. You can’t tell me that conflict has ever resolved itself peacefully.

The film remains a masterpiece, albeit one that comes with a pretty big caveat in the compromised ending. Howard Hawks’ direction is some of the most muscular of his career; his camera captures the rugged terrain with a beauty that rivals the best of John Ford, and his actors tackle their dialogue with a rhythmic patter that rivals the best of, well, Howard Hawks. Wayne was the perfect choice to play Dunson because he probably thought he was the hero—if you’ve ever seen, read, or heard any interview he ever gave, you know he really believed this shit. Clift was equally perfect for the role of Matt because he was everything Wayne wasn’t, and a good enough actor to make an audience believe he was everything Wayne was, too.

How Green Was My Valley