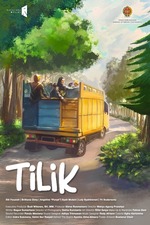 This is one of the most viral short films in my country currently!

With a fresh story and a biting script, kudos to the writer Bagus Sumartono! Satire, jokes, and bunch of typical mothers' jokes were humorously played well. One of them was a joke when Bu Tejo was dying to pee but didn't want to pee in the rice field cuz she was afraid of snakes. The character who stole the most attention was Bu Tejo as Siti Fauziah. Siti managed to portray the character most hated by everyone and she was really toxic. Appearing expressive coupled with her scathing gossips, Bu Tejo made it into the list of best villain characters in Indonesian cinema.

Tilik was surprisingly fun from the beginning to ending. The gossips vibes from those emak-emak on the truck successfully made the audience laugh even more. Good casts and performance, this film presents an honest reality of life. Praise to the director Wahyu Agung Prasetyo and the entire film crew. Must watch!