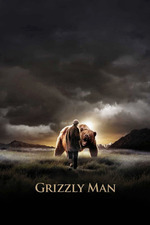 "And what haunts me, is that in all the faces of all the bears that Treadwell ever filmed, I discover no kinship, no understanding, no mercy. I see only the overwhelming indifference of nature. To me, there is no such thing as a secret world of the bears. And this blank stare speaks only of a half-bored interest in food. But for Timothy Treadwell, this bear was a friend, a savior." -- Werner Herzog, Grizzly Man

Grizzly Man is a terrific documentary by Werner Herzog, chronicling the life and death of Timothy Treadwell, whose dissatisfaction with humanity and his bear enthusiasm compelled him to spend thirteen summers with the grizzly bears of Katmai National Park and Preserve. Herzog's documentary is not only a story about Treadwell's work and adventures, but about Treadwell's soul.

Throughout Grizzly Man, Herzog explores Treadwell as a person. Over the course of the film, Treadwell's soul is exposed -- his loves, his frustrations, his exhilarations. We learn about his dissatisfaction with humanity, with the demons he has faced throughout his life. We learn about his love of animals, how he himself wants desperately to become a grizzly bear. We see him abounding with joy, seething with anger, but he is always interesting.

At times, it seems that Herzog finds a kinship with Treadwell the filmmaker. Herzog explains to us how Treadwell's films capture moments of spontaneity and beauty, both things that Herzog has endeavored to capture his entire career. In the films of Timothy Treadwell, Herzog finds touching moments, and whether or not we like Treadwell or not, we cannot help but be touched too.

Herzog seems obsessed with stories about man's relation to nature. Like Aguirre: The Wrath of God and Fitzcarraldo, Grizzly Man explores a story of man vs. nature, but unlike those prior films, Grizzly Man's protagonist favors nature over man. In that regard, Grizzly Man is a fascinating specimen in Herzog's filmography. However, Treadwell could never have come out on top. Herzog concludes that Treadwell was a disturbed individual with a death wish, and confirms on numerous occasions the harsh reality of nature. "I believe the common denominator of the universe is not harmony, but chaos, hostility, and murder," narrates Herzog.

Grizzly Man is a great documentary because it goes beyond mere documenting. It penetrates the surface to paint a fascinating and tragic portrait of Timothy Treadwell. Herzog's conclusions may expose a cold reality, but he found a soul underneath the delusions and emotional troubles. It is captivating, heart-breaking, and fascinating character study, and one of the best documentaries of the century.

The Great Ecstasy of Woodcarver Steiner