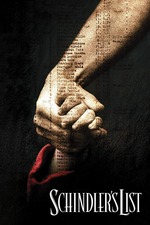 Schindler's List is the closest thing a Hollywood film can get to a Holocaust film, which is to say that Steven Spielberg's film is a powerful testament to an extent.

What works: Spielberg's cinematography brings a great deal of power to Schindler's List, because it embraces cinéma vérité. From the Germans forcing Polish Jews into the Kraków Ghetto, to the horrors of the Auschwitz concentration camp, the camera observes the events in a documentary style, sometimes catching a gorgeous image, sometimes staring right at the carnage, but always as if the cameraman is documenting the events.

John Williams' score, which I've listened to extensively, is a powerful force in this film. It's an intimate score, more intimate than any score Williams wrote for Spielberg beforehand, and as such it captures the terrors of the Holocaust and the tenderness of Schindler's grace. It is a moving score, one of Williams' best.

Additionally, Liam Neeson's performance is great. The passion of Oskar Schindler is here, meshing perfectly with his character arc, from the ruthless businessman ethic to the Messiah for more than a thousand Jews. Neeson is just as compassionate as he is compelling, bringing Schindler to life in a powerful way.

What doesn't works: The depiction of the Nazis in this film is painfully one-dimensional. They are depicted as mindless sadists, who laugh at the sight of immolation and express no signs of the human condition. This I think was a mistake. The Holocaust was a monstrous tragedy, but it was perpetuated by humans. The Nazis had a great deal of humanity in them, something that Spielberg failed to capture.

When we say someone captures the humanity of a character, what we usually mean is that they capture that character's warmth or mercy. For example, one might say Neeson captured the humanity of Schindler. The reason we say this, is because a human soul can easily recognize another human soul. When Schindler saw the Jews, he recognized that they were not subhuman, but fully human. However, this recognition can be suppressed. The Nazis were able to suppress this recognition, to commit one of the worst atrocities in history. But it takes something essentially human to reach this point. When we say someone has humanity, we mean they are compassionate, but this is one-sided. Humans are capable of evil, because of their humanity.

Because of this, Spielberg’s depiction of the Nazis is unrealistic. He shows them as inhuman, when they were human all along. It does not show why the Holocaust happened, but that it did happen. You can argue that the depiction of the Nazis in Schindler's List is acceptable, since it's not about them, but about how Schindler saved over a thousand Jews, but at the end of the day, this version of the Nazis is false. Schindler’s List offers us a shallow view of the Nazis, because confronting the Nazis’ humanity would be to confront ourselves, is which a step too far. As such, we are given Hollywood Nazis. These people are not humans, they’re from a different world.

Conclusion: Ultimately, I think Schindler's List is a powerful story of salvation, albeit a psychologically shallow one. Formalistically powerful, but misses the philosophical implications of the Holocaust. That is all.