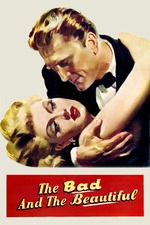 The Bad and the Beautiful

The Bad and the Beautiful was okay. Definitely a disappointment, because I expected something great and got something that was decent. I liked things about it, like the cinematography was nice, and I thought Kirk Douglas was good, even though he didn't have much opportunity for cathartic greatness. (My favorite scene was when Douglas's character flipped out at Georgia Lorrison.) But otherwise, I wasn't particularly enthralled.

I'm gonna say it, I think this movie would have been significantly improved if the story had been more linear. I realize the difficulty of doing that, especially with three characters, but I would have prefered the more linear structure because 1). it's not fresh and original anymore (Citizen Kane did it better more than ten years prior), and 2). linear storytelling allows for more suspense in many instances, and where stories like Sunset Boulevard and Citizen Kane work brilliantly as nonlinear narratives, I feel like The Bad and the Beautiful's nonlinear structure was told was derivative, uninteresting, and uninspired.

The use of music was profoundly uninteresting. I am a massive proponent of effective soundtracks in movies, because it creates wonderfully a landscape of emotion and/or place. But I felt that The Bad and The Beautiful failed in that regard, because its soundtrack was only passable, and never interesting.

Ultimately, The Bad and The Beautiful was simply uninteresting. In a world of Sunset Boulevard, In A Lonely Place, and Citizen Kane, others have depicted the Hollywood industry and larger-than-life figures more effectively and more thrillingly than The Bad and The Beautiful. It's not necessarily a bad film, but it is an irrelevant film. That is all.