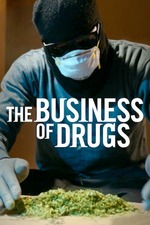 The Business of Drugs

The Business of Drugs is a lame series on the economics of drugs (except for the MDMA episode, which is just pro-legalization propaganda, without a word to economics). The miniseries is a polished production, well made to be inoffensive in its form, but as such is bland. Nothing in it particularly interesting, just watchable enough. As for the substance, what could have been an interesting economics study devolves into propaganda. For example, the series fail to address any negative side effects to MDMA, such as hypertension, adverse cognitive effects, or depressive symptoms. But the series ignores these issues, instead arguing for MDMA's legalization, for treatment of PTSD, through anecdotal evidence. (Let me be clear, I'm not saying MDMA can't help in the treatment for PTSD. I'm saying that there are negative side effects to MDMA that have to be addressed, which the series completely ignores.)

Another show about drugs, which I prefer prefer to The Business of Drugs, is National Geographic's Drugs, Inc., which is more melodramatic and simplistically structured than The Business of Drugs, but which is darker, more informative, and more powerful. Drugs, Inc. shows the business of drugs from a human perspective, i.e. shows you drug dealers and mules, as well as the law enforcement officers. It also doesn't shy away from the harsh reality of the drugs. It is not afraid to tell you that methamphetamine causes immediate brain damage, nor is it afraid to show you the shocking toxicity of krokodil. Drugs, Inc. is a far more effective show IMO, much better than The Business of Drugs.

The Plagues of Breslau