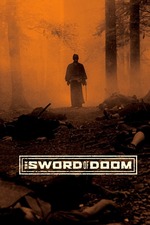 The Sword of Doom

"The sword is the soul. Study the soul to know the sword. Evil mind, evil sword."

The Sword of Doom by Kihachi Okamoto is a bloody samurai film that explores violence, depravity, and their relationship to madness. The film follows Ryunosuke, whose swordsmanship has given him exceptional fighting talent, but whose lack of a moral backbone begins to take its told. He starts the film sane but evil, and ends the film in a thrilling climax of violent psychosis.

The film is exceptionally made. The photography alone would make it an amazing feat of filmmaking, but the editing, both visual and audio, add depths of storytelling and emotion that elevate the film to great heights. On top of that, the performances capture the souls of these characters. I particularly liked Tatsuya Nakadai's performance, which gives Ryunosuke incredible believability: by showing us Ryunosuke's coldness, we understand how his calm exterior give way to madness.

The Sword of Doom is phenomenal. It's beautifully made cinema with terrific performances, all of which seek the investigate the human soul. One of Japan's best films, no doubt.