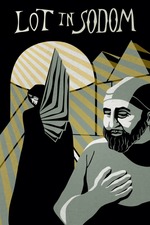 Very interesting piece. Along with the interpretive tradition that has surrounded Sodom and Gomorrah since about 100 BCE, this short film focuses on the gay aspects of the narrative. Which of course does not reflect the historical reality underlying the story. I mean that nobody had concepts like "sexual orientation" when S&G was written, and anal penetration was considered shameful for the bottom but not the top, so conflating the men of Sodom with "homosexuals" is a gross over-reading, missing that the real point of the story — Hospitality, as later Biblical writers interpreted it. Which means Lot in Sodom says more about 1930s American homoeroticism than Iron Age IIB Levantine homoeroticism — which, no shit, is obviously the point. Lot in Sodom works better as a collage than a narrative piece: the character Sarai is thrown in (the woman laughing who then gives birth), and the text cards have verses from Proverbs, Song of Solomon, and Ecclesiastes. The most radical aspect of this short film is the willingness to (suggestively) depict queer bodies, which even in the Pre-Code era must have been visually shocking.