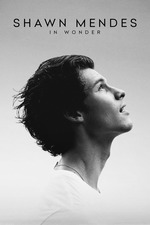 The way it started with Shawn in the shower… it definitely captured my full attention. Shawn Mendes: In Wonder is a documentary showcasing the life of the singer and songwriter Shawn Mendes, starting from his pre-music career to a well-known male artist. The film humanizes a popular celebrity by showing his life before stardom and his relationship with his family, loved ones, and of course, his beloved fans in an hour and a half documentary.

Being a singer is difficult job, as someone who can’t even sing for his life, and with someone in the same popularity as Shawn Mendes, it’s even more difficult, as he has a lot of adoring fans wanting to see him perform live on-stage. It’s no wonder that the film’s main conflict revolves around the time when Shawn has to cancel a concert in Brazil because of complication with his voice, showing how crucial vocal chords are to a singer and the disappointment a singer might feel after not being able to do what they love the most. Other than the aforementioned tour issue, the documentary also showed his life before his singing career kickstarted, by showing his auditions, his daily habits living in Ontario, his family and friends, and his first opening act, where he met his current girlfriend, Camila Cabello.

While his career definitely boomed after that opening act, his problems remained relatively tamed compared to other artists who released a documentary in the past couple of years. Taylor Swift combated an almost career-long battle with Kanye West and Kim Kardashian after the 2009 VMAs scandal and 2016 phone call controversy the almost killed her reputation entirely shown in Miss Americana (2020) and Lady Gaga battled multiple controversies and issues, from Madonna comparison to relationship and family problems in Five Foot Two (2017). The documentary only showed run-of-the-mill problems like imperfection mentality, manifestation of insecurity, vocal problems, and homesickness, all of which are common to popular singers such as himself. I wished it showed more of Shawn’s unique vulnerabilities and how he fought it throughout his career, but the film showed little to none of that, and that’s disappointing.

The cinematography is dizzying at some shots and confusing in others and there are more scenes talking or showing Camila and Shawn’s relationship than focusing on Shawn himself, making me believe that this is more about their relationship and less about Shawn. The tour shots were nice and Shawn’s fan interactions felt genuine, making me want to go to a concert of his to experience it myself. All in all, while it lacked a controversial drama to talk about, this documentary film brings positivity and inspiration to up-and-coming musicians to never stop chasing their dreams.