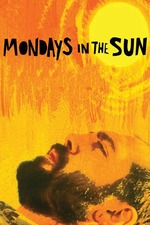 Mondays in the Sun

-Amador: The question isn't whether we believe in God or not...the question is if God believes in us. Because if He doesn't,we're screwed. I don't know if I'm explaining myself. I think he doesn't.

At least,he doesn't believe in me. Nor in you,Santa.In Jose...he might believe in him a bit more. I don't know.

-Santa:But we believe in you and that's what matters.

-Amador:Yeah, but you aren't God, for Christ's sake.

-Santa:Serguei, does God exist,or not? Do you see Him when you were up there?

Serguei is an astronaut.

-Serguei:When Gagarin comes to earth after first trip a journalist asks same thing, if he saw God in space. And Gagarin says, "Yes,I saw Comrade God in space, and He told me to tell you that He does not exist."