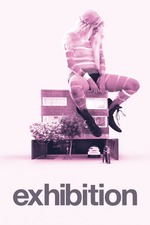 Joanna Hogg's Exhibition is a fascinating film that demands a lot of its audience, but rewards the effort. It's essentially a three hander. D is a performance artist, currently unemployed, who potters about, trying to connect with her husband, H. He's a successful architect, a bit short-tempered and prickly, spending his days in the upstairs study, rolling about in his designer chair on the hard floor like storm clouds brewing. The third player is the house itself, a modernist inner city haven, all glass, and concrete, with big windows onto a courtyard and a view over the noisy neighbourhood.

The house is their castle, a space they have lived in together for the past 20 years. They don’t have kids, but they sometimes act like children. During the time they've been in the house they’ve gradually retreated to a still fond, though fractious and passionless marriage. The home is a stage for their domestic arguments and their attempts to connect. But it is also a mould for their identities. H’s personality matches the house’s no nonsense, rational design. He takes an analytical approach to everything, being mostly interested in functional relationships - through his approach to work, to sex, to the workings of the boiler. D is quite the opposite - intuitive, exploratory, immersed in the world of dreams, fears and fantasies. Her’s is an insecure, sensual relationship to the house, experimenting with its dimensions and possibilities. But after all this time together in this threesome, they have finally decided to leave their home. And as the sale draws near, the ropes that have been tying them down slowly start to release, and they begin to gently relax back into a happy relationship.

What makes this strange film work so well is the subtle and naturalistic performances of the main actors and Hogg's wonderfully gauged direction. I've rarely seen a middle-aged relationship depicted as sexily as this, and there is a tasty streak of dry humour that keeps things lively. The whole package is enhanced by a sound design that accentuates the noises from the house and the street, effectively personifying the environment’s role in their relationship.

The end result is a slow but absorbing experience that combines an intimate story of a middle-aged marriage in the balance, a study in archetypes (the rational against the emotional), and an interesting look at how we define ourselves in relation to the architecture of the spaces we inhabit.