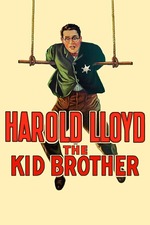 Who else better to contrast the manly lawlessness of the west than Harold Lloyd, a man who dodged and overcame western stereotypes with an endless fountain of inventiveness.

The Kid Brother is a stampede of gags. Lloyd wanted more gags in The Kid Brother than in his previous movies, so he hired 8 writers solely to come up with more. This makes the movie enjoyable, but a bit hit-or-miss for me until the last act where Lloyd saves the day.

After being told he should stay at home because he might get hurt and recovering the money was a “job for men”, of course Lloyd has to be the one to get the money back. He does it in the least becoming ways according to the genre - hiding, pretending, and getting lucky. The two times he brandishes a weapon, they fail him. He lifts up an axe to swing down, and the axe head falls off. He places a pipe through a window to look like there’s a gun pointed at the robber. When he gets into a fistfight, he gets clobbered, but that doesn’t matter because Lloyd’s ingenuity is a superpower on its own. He proves himself as worthy of being a Hickory by saving the day.

Interesting to read that Lewis Milestone directored a majority of The Kid Brother, but was uncredited.

24/25 - Wild West Summer Challenge 2021: Watch a Western you haven’t been aware of until you started looking for Westerns to watch for this challenge.