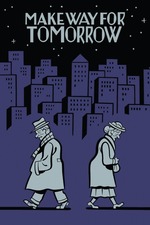 “Life flies past us so swiftly that few of us pause to consider those who have lost the tempo of today. Their laughter and their tears we do not even understand for there is no magic that will draw together in perfect understanding the aged and the young. There is a canyon between us, and the painful gap is only bridged by the ancient words of a very wise man - - - - -“

“Honor thy father and thy mother”

It was such a difficult ordeal hunting for this film on the internet as it was not available elsewhere, a punishing search, yet I cannot say it wasn’t worth it as I was treated (though with this film’s emotional weight, treated may not be the right word) to an incredible work of art.

With only 90 minutes McCarey managed to break down my very soul, leaving me shattered in a pool of my own tears, as Orson Welles said in his book interview with Peter Bodganovich, “It would make a stone cry”.

It certainly reminds me of Yasujiro Ozu’s Tokyo Story (1953) , which released 16 years after this, in that they centre around old parents and their neglectful adult children, dealing with some similar themes as well, though they do differ a great deal in many other ways. And in fact Roger Ebert mentions that this film was said to have influenced Ozu, another terribly sad masterpiece.

An excerpt from Roger Ebert’s review

In the same year as "Make Way for Tomorrow," he made Cary Grant a star in "The Awful Truth." When McCarey won the Best Director Oscar for the latter, Peter Bogdanovich tells us, he stood up and said, "You gave it to me for the wrong picture."

Best Film of Each Year