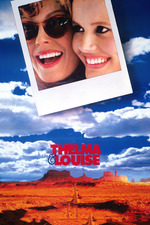 "Something's crossed over in me and I can't go back. I couldn't live."

I have very rarely felt such a strong adrenaline rush while watching a film. It felt so liberating and empowering to see women rebel against the abuse perpetrated by men. This film to me represents the breaking point, the moment in a woman's life when she realizes how much she's suffered because of the patriarchal society and decides she won't take it any more, no matter the cost. It's a masterpiece, especially given that it is nearly thirty years old and still more relevant than ever.

Thelma's character arc is the most relatable in this story. Louise had already reached the breaking point before the film started, she had already had enough. At the start of the film, Thelma knows she wants and deserves more, but she still thinks that "that's the way life is for women". Even while getting really closed to being raped, her words are not about her own consent, but about the fact that she has a husband waiting at home. Even after this, she still falls victim to a dangerous shirtless Brad Pitt. I love the moment when we get to see her breaking point, when she points the gun at the officer who pulls them over and forces him inside the truck. I loved the expression on Louise's face in that scene, when she realizes that Thelma has finally reached that breaking point and will no longer tolerate the rules dictated by the patriarchal society. I also love the fact that at first Thelma wanted to report her rapist, but Louise tells her that people saw her dancing with him all night and that "we don't live in that kind of world". Near the end of the film, Louise thinks they should have maybe just reported him, and Thelma tells her that it would never have worked and that she's only sorry she didn't shoot the guy herself. This whole story, even if often in a somewhat less extreme manner, is in its skeleton the same for every woman that went from laughing at the word "feminism" to constantly talking about the systematic social oppression of women to anyone that happens to be in front of them. I, for one, am definitely in this category.

I love how unapologetic the film is towards what the two women do. The narration does never, even for a second, consider the possibility that Louise is a murderer. The way the story is told is also saying that the rules of our society are unfavorable to women, and if they want to be free, they have no choice but to break the law. This is no silly film about two friends taking a road trip, this is a very thoughtful and profound critique of the patriarchal society. One of the best films ever made, for me.