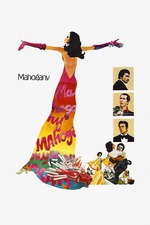 Mahogany is pretty much all over the place. TCM hosts warned it was going to be campy. There were some scenes where Diana Ross was ostentatious. Certainly the costumes were out of control.

Diana Ross plays Tracy, from Chicago, who designs her own clothes. The credits bill Ross as the clothes designer too, which is pretty cool.

Anthony Perkins will never live down Psycho. Here he plays Sean McAvoy, a photographer who has designs on Tracy, who he christens "Mahogany ".

Tracy/Mahogany's love interest is Brian played by Billy Dee Williams. He is more political than her. She privately sings him a song about him running for office. She is running too: from her humble beginnings and from those telling her she "can't" do this or that.

Overall, it was a good watch. TCM had introductory and closing comments explaining how timely it was, especially since Beverly Johnson was the first African American woman to appear on the cover of Vogue (American version) the year before this movie came out.

A Song to Remember