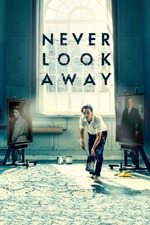 Florian Henckel von Donnersmarck wrote, directed, and produced a story based on the life and work of artist Gerhard Richter. It starts from his childhood, focusing on the Nazis who targeting his aunt who suffered from mental illness.

An initial critique I came up with was the spinning sequence so clearly lifted from Fassbinder's Martha (whose great cinematographer was Michael Ballhaus). The cinematographer of Never Look Away was Caleb Deschanel who composed most of the other shots in the film brilliantly, so I overlooked the theft.

The film itself is a magnificent work of art that looks at the events that inspired the artist's creativity. Gerhard Richter is rechristened "Kurt Barnert" and if deftly portrayed by actor Tom Schilling. Saskia Rosendahl so amazingly portrayed Barnert's Aunt Elisabeth that she reminded me of a young Theresa Russell energetic-wise. Paula Beer plays Ellie, his girlfriend. I've seen her in other films, but she is at the top of her game here. The costuming is excellent, especially for Elisabeth and Ellie, whose dresses one can only dream of.

Everything culminates with Kurt discovering who he is after years of turmoil, education, and experiencing life. It's a must-see that makes every other submission to the Oscars for best foreign language pale in comparison. I've only seen the ones from Denmark, Japan, Belgium, Netherlands, Argentina, Mexico, France, UK, Iceland, Italy, Kazakhstan, Sweden, Norway, Australia, Peru, Poland, and now Germany, but as I rarely give out top scores, I think it's safe to say this one is my top pick. I nearly took off a half-point and gave it 4.5/5 for my critiques on the cinematography, but forget about it. This was an amazing experience that blew me away. It made a huge point about cause and effect, with a story that was even based in reality.

Vegan alert:
There is an egg and some animal grease.

Crimes against humanity include:
Forced sterilization and abortion
People gassed in showers