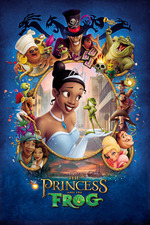 Anika Noni Rose plays Tiana, a Disney princess from humble beginnings. Rose is so underused in film compared to her talent! Right now, I'm just binging on a bunch of Disney films I never got around to. I'm sure I've heard half of the songs (which are mostly penned by Randy Newman) despite not having previously watching the film before.

Dr. Facilier's song, "Dig a Little Deeper", seems reminiscent to Ursula's
"Poor Unfortunate Souls" from The Little Mermaid. However, "Dig" doesn't have the same oomph and falls flat for me. One final critique: the crocodile featured seems like it was the same one from Peter Pan. I don't know if it's lazy, or if it's nice that there's a common thread that binds these films together in the Disney universe.

In any case, it makes for a decent watch.

Vegan alert:
-A frog mask is harshly put on the cat and the cat is shoved in Tiana's face
-Honey on the beignets