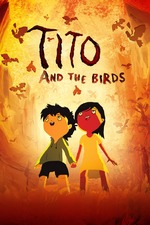 Tito is beautifully animated, as if a painting with the background containing broad strokes. The story is okay, but flimsily put together. Children might enjoy it. I saw the Portuguese version, but apparently there is an English version as well.

Please reference this article in the Boston Herald, but beware that there is a picture of several pieces of bacon (which is indelicate, but less offensive than the WaPo article in general, which basically mocks vegans):
www.bostonherald.com/2018/12/05/peta-calls-for-rewording-of-popular-anti-animal-expressions/

I do not endorse PETA's stance necessarily, but it is something to take into consideration.