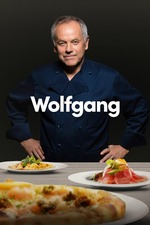 Am I a character?

I found it irresistible to check out the Wolfgang Puck documentary. First of all, I love food, and am always eager to check out recipes, books, and advice from top chefs such as Alain Ducasse, Paul Bocuse, Joël Robuchon, and now… Wolfgang Puck. Despite my conversion to veganism four years ago, I realize there’s something to be gleaned from master chefs. As the documentary recounts, Wolfgang Puck was really the first celebrity chef, after he made opportunities for himself wherever he could. From humble beginnings in Austria, he pursued his passion of cooking and went to France, where he worked at Baumanière and took the opportunity to suggest to the chef how he could improve the sauce. Puck kept forging his way ahead until he moved to America, built up a dying restaurant called Ma Maison, and subsequently started his own restaurant.

The grass is greener where you water it the most.

The main takeaway is that Puck really ended up in some really crummy places and turned whatever was around him into gold instead of throwing in the towel. He changed the perception of what a chef is with his open kitchens and having pizzas available at a fancy restaurant. After Johnny Carson began ordering out dozens of pizzas and admitting to Puck that he froze them, Wolfgang Puck started his own line of frozen pizzas and canned soups for his own crowd.

Food is the conduit of love.

The film features his first wife, Barbara Lazaroff, who helped push Wolfgang forward and who helped create the design of his first restaurant. Unfortunately, he was more concerned with building his restaurant empire and later confessed that he didn’t spend as much time with his family as he should have.

Food is family. Making people feel happy is my purpose in life.

Surprisingly, this is a Disney+ original movie and it was also the first English language movie with closed captions that I encountered on the Tribeca at Home platform. The score was both snappy and unobtrusive and the film flowed very well. There is a ton of footage of celebrities at Spago as well as Tom Hanks calling Puck’s catering at the Oscars “good”.

Vegan points:
-Cantaloupe and shots of fruits and vegetables
-Puck would make two hour trips to pick up vegetables