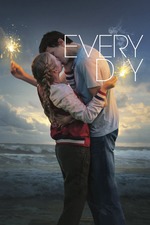 "Do you consider yourself more of a boy or a girl?"
"Yes."

Having read and been fairly underwhelmed by the book years back, I was really taken with this adaptation. I loved how there was no wasted time in exposition -- we're just dropped into A's routine, and we understand the details of their circumstance later. It's a much more compelling route to take than just explaining it all straight out, and there's a greater sense of participation on the viewer' behalf because of it. Additionally, putting the primary focus on Rhiannon and letting A exist around her was a fantastic choice, as it gave us an easier character to ground ourselves with. While A changes day to day, Rhiannon is much easier to follow. I was impressed, though, with how easy it was to identify A's character. Through a whole slew of actors, I always felt like A had a consistent personality, a compliment to both the writing and performances.

While much of the film still falls into YA-romance cliches and corny dialogue, the side-characters were given a surprising amount of depth and personality. Additionally, while the emotional beats are predictable, the ending was quite unexpected and mature, particularly compared to the book. For the most part, everything added and excluded was for the best. One of the only details I missed from the book was a moment when the protagonist expressed the moral dilemma he faced when it came to sexual activity, but the film still kind of addressed it subconsciously by just having the characters never get that far.

I still think this deserves a much gayer adaptation. The premise so easily lends itself to it -- a girl falls in love with a gender-fluid person, yet for the most part, this reads as a completely heterosexual romance. Almost every body A inhabits in the film is male, even though we do get decent racial diversity and the inclusion of a trans actor. I appreciated the moments where gender and sexuality were discussed, but I still think more could've been done with it. A bit of a missed opportunity, but still compelling in its own right.

This isn't going to shock you -- if YA romance isn't your thing, Every Day won't be either. However, if you have any interest in the genre, I do think this is one of the best adaptations to come out in years. It's heartwarming and entertaining with moments of genuine emotion, and I enjoyed it far more than I thought I would.