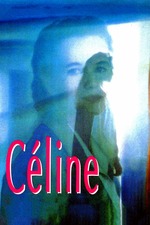 This year has been sort of terrible for me, though admittedly better than ones prior, and today I was feeling especially dislocated and alienated for reasons that still mostly elude me. I suddenly felt as though my life had already ended before me, that anything to come would be outside of me, imbalanced, without a gyroscope, and more than anything else, that I was lost and alone. Often, when I'm at my lowest, I inundate myself with art that I know will only exacerbate or intensify those feelings, perhaps in the hopes of finding some sort of catharsis in doing so. I decided to revisit this film tonight because I felt as though I needed to. And now, having finished the film once again, I see that my feeling was right.

Céline, as possibly slight as it may initially seem, has a greater grasp on the nature of psychological healing than almost any other film I've seen. The spiritual element then only serves to reinforce the ties already established corporeally, a transference of consciousness—a soul untethered, lost, found, lost again—originating from a transference of generosity, kindness, compassion, and love between people; empathy as a means of survival.

Brisseau's formalism bonds the darkness of a vacant corridor with the openness of nature, and eventually, the juxtapositions become negligible, as absence and omnipresence are united—the void passed over and transcended. The vast majority of the cinematography consists of static shots, close or in medium, which makes the occasional zooms and pans even more devastating, celestial movements all culminating to an ecstatic release. Moreover, the film opens and then later refers back to the rites of antiquity, Egyptian pharoahs in their tombs and Stonehenge as a memorial site for those living ever onward, linking Céline's own transfiguration to a boundless & timeless form of mythologizing. In a way, Brisseau's film presents itself as an updated holy text.

I've watched many incredible films this year that have affected me greatly, but none have haunted me as much as this one, a film that manages to make me simultaneously feel as though I am dying and as though I have nothing to fear for the rest of my life.