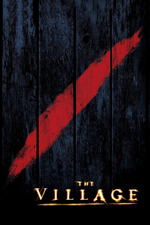 Who has done this heinous act?

perhaps the most acutely realized articulation of post 9/11 anxiety in any film to date. this is a distinctly American film in this regard, though the means by which Shyamalan elaborates on those anxieties are universal: the woods—the great Unknown of the premodern world—and the wind in the trees, relentless and indifferent to human concerns. we propagate a mythic threat of the unknown while simultaneously ensuring ourselves that it could never actually happen to us specifically. for the overwhelming majority, terror is unreal, it exists in the abstract, and that’s exactly what makes the fact that fear persists beyond the film’s first revelation so effective; even when we know the myth to be a fallacy, its foundation will never feel untrue. this is horror in broad daylight.

as i continue to revisit his films, i’ve come to realize that a large part of Shyamalan’s genius stems from his application of what would otherwise be considered obvious metaphors if not for the fact that they arise from within the worlds his characters inhabit. echoes of The Sixth Sense manifest in this film’s equally explicit treatment of color, the red menace and safety in yellow. the device is simple because for these people, it needs to be. in the wake of collective trauma, symbolic binaries become the ultimate reassurance of order in the world. magic rocks and red berries beyond the village threshold, this is a semiology of willful obfuscation (the monster(s) always on the periphery of Shyamalan’s camera). the bad color is in our blood too.

it is then with the second great realization that Shyamalan’s conceit becomes even clearer, where the myth unfurls to reveal its basis in a fundamentally contemporary paranoia. a regressive traditionalism misguidedly serves as the path to sanctuary when trauma unites us and keeps us from moving forward alike; from afar, Covington appears as a model town made ahistoric by circumstance. the village elders keep their pasts locked away in plain sight, and it takes someone comparatively naïve and exceptionally brave to sever the binds of controlled isolationism.

Heartache is a part of life—we know that know. Ivy is running towards hope . . . Let her run.

and because Shyamalan’s films are always so perfectly centered around belief, the definitive moment here is that of a hand clasping that of another as a result of having faith in undying love. the reversal in perspective from Phoenix to Howard is such an essential element in part because it defines their love as both wholly reciprocal and powerful enough to incite acts of impossible courage. for other filmmakers, the illustration of such ideas could so easily fall victim to maudlin incompetence, but here (as in all of his films) it works precisely because Shyamalan is resolutely sincere in his beliefs, and that sincerity bleeds out into every single image he’s crafted.

The Village begins with a burial and ends with a scene of sublime extrication. we first see the mass of townspeople witnessing a funeral from behind, anonymous and unconscious, but by the end the perspective has switched. the elders arise in acceptance around a miracle made possible by allowing for the resurrection of hope, and with Ivy as their guide, they finally begin to look forward.

P.S. When You Are Going to Die