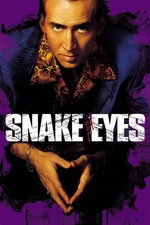 Much of what I love about this film is captured in that first long oner. I usually don't like oners because they feel distracting and self-congratulatory. The technical precision and wizardry in any lengthy oner (or even crane shot for that matter) is impressive but often in a way that feels affectedly and irritatingly grand. The opener of Snake Eyes on the other hand has a growing anxiety throughout as if at any moment the shot, and the film itself, might fly off the rails. Though, obviously, deeply controlled, De Palma's camera and Nicholas Cage's feverish acting continually undermine what a long steady shot typically convey.

That apprehensiveness is, of course, a necessary element to a conspiracy thriller where the villain could be any one, anywhere and pop up at any moment. But I think what I like about that shot and this film as opposed to the standard thriller fare is that Cage's Rick Santoro is anxious before the assassination attempt happens. He's anxious with the world in general and doesn't know how to fit in it, always attempting to present himself as someone more important than he is, richer than he is, somehow both sleazier and more straight laced than he is. But as soon as the plot catapults into motion, he becomes bizarrely calm, in control of the situation for the most part, and the film shifts into a weird and more dreamlike aesthetic. Cage drifts from scene to scene with easy, more in control as the world seems to unravel around him.

The inversion of expectations is a surprising inclusion, something that I'm not completely done unraveling but totally struck me regardless. Thriller isn't normally a genre I enjoy, but perhaps all the ways that De Palma pushes Snake Eyes away from expectations is exactly why I like it.

Nothing But a Man