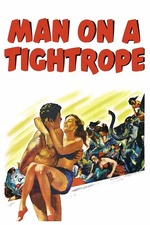 I love how director Elia Kazan really takes us to this place, which is a circus in Czechoslovakia behind the Iron Curtain after the war. It really feels like we’re there, in part because he shot it in Bavaria and used many members of the (real-life) circus that had escaped from East Germany a few years earlier, and also because he often takes us behind the scenes. The cinematography is great, and the film has high production value.

Frederic March plays the leader of the circus, and early on we see him on all sorts of tightropes, besides the one he uses in his act. His daughter (Terry Moore) is defiant after having fallen in love with one of the workers (Cameron Mitchell). His wife (Gloria Grahame) mocks his manliness, and openly cheats on him with the lion tamer. The authorities (including Adolphe Menjou) watch his circus closely, and demand that he make changes to comply with the principles of communism. A rival circus owner (Robert Beatty) threatens to surpass him as his equipment ages and deteriorates. And lastly, he plots secretly to escape the country, but there seems to be a spy in his inner circle. Seriously, this guy is under a lot of stress, and March plays the part very well.

The story lines for all of these things are well told, and there are memorable scenes for each of them. The mock fight March has with Beatty after some funny repartee is brilliant, and there is a gravity to it because both men see that despite their bitter rivalry, they are united in their hatred of the state. Grahame sizzles every time she’s on the screen, though it’s really unfortunate that when March eventually slaps her for her impudence, she swoons over it (“You should have done it a long time ago.”) The crew of communists are interesting because Kazan shows us how aside from tormenting the circus leader, they can turn the screws on each other via purity tests, which you often see when a group gets radicalized in one direction or the other. I felt he did this in a way that was reasonably accurate, and that he wasn’t producing propaganda.

The story lumbers a bit down the stretch, but it had built up so much equity with me that I didn’t mind. If you can put out of your mind Kazan’s shameful testimony before the House Committee on Un-American Activities the year before, I think you’ll find this lesser-known film of his well worth seeking out.