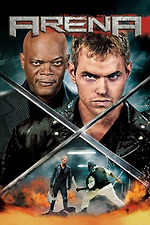 The description on Netflix caught my eye, and I decided to give it a shot. in the end, I was pleasantly surprised. The film doesn't break ground in terms of fight choreography, but it does keep your attention. While the story does not flow as well as it could, strictly from a storytelling perspective, it is at least put together enough to make the movie watchable without the viewer felling like the story is Frankensteined together. Both Kellen Luntz as well as Samuel L. Jackson are enjoyable to watch, especially Jackson. The only really issue I had, that pulled me out of the movie, was Luntz character randomly growling as if he is possessed and/or part animal. It's a feature that pops up twice and they make no attempt to address this. Oh and for one scene they randomly decide to let blood splash onto the camera lens, when this shoot is never used throughout the rest of the film. Those are my only real issues. So, all I'm all it is a decent movie to put on if looking for a movie off the beaten path that, won't be on your top 10, but will be at least enjoyable.