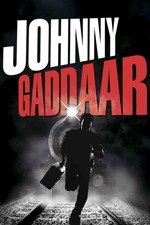 Vikram is a sneaky, nervous lying son of a bitch, in the totally wrong unlikable way. Trying to steal money from his more sympathetic small time gangster buddies, to start a new life with his girlfriend.

But Vikram is supposed to be our hero in this crime thriller. Cuddling with his cat, leaving fingerprints on every dead body he stumbles upon, slapping his "hysterical" girlfriend and getting really good at covering up his crimes.

Unfortunately Johnny Gaddaar takes way to long getting started, and way to long wrapping the whole thing up. And I'm not sure how they wanted me to feel about Vikram, and as the credits roll that makes me not sure about what this movie really is. Is it a crime drama? Well, no, it has way too much humor in it for that.
Is it a action comedy? No, not enough fun moments, likable lead and one-liners for that.
A thriller then? Hmm, no, not enough suspense...

... Is it any good at least? Yeah, it's a pretty decent movie, with a lot of 70s crime thriller references that really works to the films advantage. It's just that it's all over the place. Which I expected, being a Hindi film and all, but in this case it actually felt like they tried to make something neat and focused, and failed.