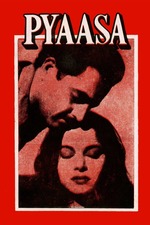 Long before the current idealization of romance with shallow and utter ridicule, Bollywood probed over the individualistic explorations of a character on the context of romantic ordeals while concurrently considering the sociological depth to a fair extent. Hailing from such an era of Bollywood, the presentation of 'Pyaasa' was obligated to it's visible mastery, quite spontaneously. Guru Dutt's diversity with the presenting of an emotionally irking plot while simultaneously existing in his own creation as an exploited soul suspended in the societal filth and abominably sordid mindsets of people poisoned by an ambition of financial prosperity, is a qualitative absolution on the very least.

Apart from being an ode of lamentation to a socially, psychologically, sentimentally and uniformly mistreated transpiring poet, Vijay; what really is 'Pyaasa'? Guru Dutt's ideological exploration of humanity on the scale of a collective community, the poetic mourning conveys a social critique to the hapless hypocrisy of the same. The scale of radicalism the story's pedestrian characters divulge in, is very relevant and realistic (thanks to Guru Dutt's visionary perception on the societal standards subjected to the accounts of capitalism) in it's maneuvers. Rather the surprising facts are of the symbolical religiosity that engulfs and moderately accentuates the destiny and deterioration of Vijay in handful of the film's ultimate sequences, implying Dutt's elemental juxtapositions analogous to European arthouses.

'Pyaasa' initiates it's tragic striding with an antonymous perplexity of satire in it's narrative through the first act and slowly mumbles into exposing the hues of a capitalistic society that never gave anything to it's righteous resident. As a consequential means to enact the intrinsic demeanor and poignancy in the film's retelling, Dutt disposes Vijay onto several inconsistencies in his existence, leading off to a melancholic unbalance which is obviously after a fair acquaintance with Vijay's personality placement and development through an impeccably artistic narrative unfolding of previous mishaps. With choreographing and structuring of sequences resembling the Western productions, Guru Dutt redefines his excellence with expressionistic views through Vijay who is left onto the realization of the existential harshness and futility of an irrevocable society.

As much as 'Pyaasa' is a substantial critique on materialism, it is also an expedition towards the achievement of tranquility. Dutt presents this self realization of Vijay after his soulless scouring of streets, witnessing the cruelty and introversion of people unaffected by a man's death. Just like Damiel and Cassiel oversaw the despair, desperation and gloom of people on a degree of humanity as a race in ‘Der Himmel über Berlin’ 1987, Vijay witnessed the cruelty, masked facades and trickery of people on a communal level and went on towards the liberation of his soul to attain peace. 'Pyaasa' is nothing less of an artistic demonstration of societal disintegration and corruption of morality which works on dense tropes of spirituality.