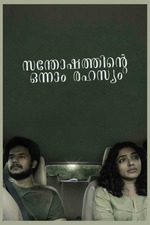 Don Palathara's new film, 'Santhoshathinte Onnam Rahasyam,' offers a sigh of relief from the bourgeois liberal trend selling hot in the Malayalam movie market. It is not a film that derides liberalism, not one that wears it on sleeves either. Somewhere in between, it tries to capture the complicated duplicity of a liberal monogamous relationship.

The individuals are flawed each as the other, they both are obsessive, possessive, annoying, unsophisticated, demeaning and offensive in equal amounts. Even by the time it ends, we get no sense of who's who– whether a gender disparity exist between them or not, Don lets the picture out in the open than define each character or their action. There are no broader gender stereotypes nor any swapping of gender roles nor masculine-feminine relations, everything's a complicated muddle.

The form resembles Abbas Kiarostami's 'Ten'. Set entirely inside a Car, Kiarostami filmed Ten with multiple cameras, there are two angles; although not always edited in a shot-reverse shot pattern. Whenever the characters were in a conflict, he alienated them inside an uninterrupted single. Don's film is dramatized entirely around one situation: a pregnancy test result and the anxieties tied to it. So the camera is locked-in for the entire course, as a two-shot, but it is composed in a manner that evokes a split screen. It is also an irony that it is barred from any movement; given the nature of their relationship.

The film is also structured smartly, taking halts in between to reboot topic and tone. After a loud, borderline annoying bickering, the car halts for a couple of minutes in order to absorb that loudness back into the movie. This sense of control is maintained wonderfully till the first 40 minutes, since then the film veers, quite willfully, into a dud cameo of an old lady, and worse, a metatextual invention where the director himself (dubbed?) takes a self-jab. The bit song introduced in the end too, sort of lends a romanticized closure than a bitter ironic note. Don Palathara's films are theodicy in cinematic form, i don't find no irony or blasphemy in them. This is considerably a better one among his works that i've watched.