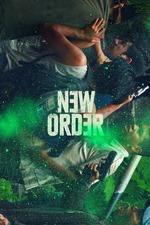 number 1: this is Joker from the perspective of the 1%, an idea that’s so goddamn stupid it makes me miss the terror of Todd Phillips.

number 2: this is somehow a worse version of a Michael Haneke movie, a filmmaker I no longer like as I am older than 13 now but who at least has basic ideas for the nihilistic chaos he’s going to subject his characters to. Michel Franco does not have an idea beyond “maybe we’re all bad sometimes” and “let’s show a woman getting extensively tortured”

number 3: this treats working class Indigenous Mexicans starting a revolution against the rich who’ve perpetuated their oppression like the North Korean army in the 2012 remake of Red Dawn. I shit you not. it is impossible to ignore if you’ve seen both movies. they practically have the exact same exterior shots for “the enemy has decimated our cities” and they both use large groups of non white people as nameless armies of unending destruction, designed to tear apart the bourgeois society. there are no specific politics about class explored in New Order, just empty aesthetics used to promote Franco’s aim to “make the viewer uncomfortable” and there are also no real politics in Red Dawn (2012) which is just about The Flag. if you took the Josh Peck character in Red Dawn and put him in this, it would make sense. it is literally Red Dawn, the remake that everyone hated, but as an arthouse Haneke rip-off with Joker aesthetics. I’m losing my mind.