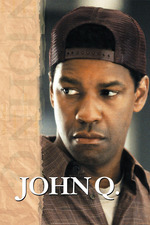 For all the talk that surrounded this movie about it being too dramatic and over-the-top in the way the subject matter is handled, how heavy-handed it seems on the central issue of affordable healthcare, it can’t be denied that Denzel Washington is a powerhouse of an actor. He might have won the Best Actor Award for Training Day, but he should’ve definitely gotten something for this movie. I think regardless of the common critique about how he essentially plays the same character, he plays the heck out of it.

His portrayal of the honest to goodness working class husband and father had me in tears more than once. Particularly during one of the strongest, most touching monologues I’ve ever seen in any movie. In an intimate moment between a father and ailing son, Washington literally pours his heart out - this is what the whole film is about at the core.

Sure, the healthcare angle is prominent, but that feels like more of the cerebral piece of the film. The part that allows you engage in an intellectual conversation about it all. Meanwhile, what a dad would do for his child, the boundless notion that heaven and earth would be moved, torn down and reconstructed if necessary, is the beating heart (no pun intended) of the story. It reminded me of a more dramatic version of the action/thriller Desperate Measures, another film in which a dad takes, well, desperate measures, to get his dying son a bone marrow transplant or else the kid won’t last much longer.

Both films raise questions about the believability of the circumstances and how people respond, etc. but still, there is something powerful about that primal instinct to protect those we care about. Even if we don’t believe how it all goes down, we believe that instinct, because we might also take matters into our own hands were we desperate enough.

I did question a few things depicted here including the lack of tact and bedside manner of the prominent representatives of the Crisis of Hope Hospital. James Woods’ Dr. Raymond Turner and Anne Heche’s Rebecca Payne particularly, did not at all feel like humans who genuinely cared about how heavy the idea of John and Denise losing their son would be. Perhaps this was the point though. The audience needs to be on John’s side and the way these two characters were portrayed for the first two-thirds of the film make it easy to ride with John. They eventually come around in their own way, but I felt that it seemed less likely that actual doctors and hospitals officials would move this way - sure it happens, but not that often I don’t think!

The other thing I wasn’t 100% sure about was Kimberly Elise as Denise Archibald. Don’t get me wrong, she is solid here. However, as good as she is, there were points when I didn’t feel she matched with the other actors, or Denzel in some parts, particularly when there was tension between the two of them. She seemed just a tad over-the-top for me, the calibration seemed just a hair off. As I think more on it, I wonder what Viola Davis would have done with the role. She feels to me, like one of the eternal matches for Denzel on screen. (Julia Roberts in The Pelican Brief might be a close second in my book). In fact, I’d argue that Viola Davis is THE eternal match for Denzel on screen (and on stage for that matter); I’ve always seen her as the female Denzel in lots of ways.

All that aside, this is the kind of movie Denzel carries in his sleep. Yet another example of the skill and overall gangstaness as an actor. Check it out for Zel if for nothing else.