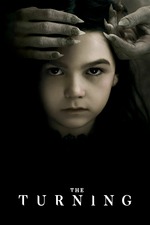 You know how you look through a photo album and you see a range of various images? Some of them are beautiful, purposefully composed shots. Some are silly, and some just are. There is nothing thematically that string the photo album images together; the album serves no real purpose other than to show you a range of experiences in a person, a family’s life. You see lots of scenes, each with their own stories that led up to and followed that moment in the album. Usually, they are the bits that the owner of the album cares to remember. That’s what this film ends up playing like.

It can be viewed as a series of scenes that rarely seem to connect, or build up to anything other than a series of jump scares and unsettling moments. There was no real crescendo to it. Things just happen and then they stop happening. There was no falling action, or resolution. I don’t mean that in the sense that things needed to be resolved, because I think that’s okay in stories to have things that aren’t resolved. I mean in the sense that by the end, one feels empty, for lack of a better term. What are we supposed to think? Is Kate ‘crazy’ like her mother all along, as the film seems to suggest, and her being at the remote estate was how her illness manifested itself? Is the place truly haunted and the residents are a part of that? But maybe not, right? After all, someone else does attempt to escape at the start of this film.

Either way, the film sets things up well enough, but there is never any payoff. And that is the real shame of what might have been, and could have very well been, an effective thriller. The cast is mostly strong, especially Mackenzie Davis and Brooklyn Prince, but Finn Wolfhard at times feels stilted a bit. There are moments where he is very strong and convincingly creepy, irritating, and tender and normal teenager. Then there are moments when the delivery feels not quite smooth, like the beats in between aren’t comfortable. This is just me though. You might feel differently.

Ultimately, there was effort made to create something, which I respect. I’m just not sure I feel the execution worked as well as it could have for my taste.