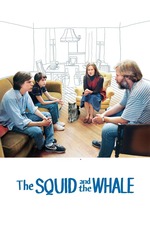 Well, that knocked me down flat.

The Squid and the Whale is one of the most emotional dramas I have ever seen.

I kinda felt the same way with The Squid and the Whale I did with Manchester by the Sea, it isn't a fun movie by any stretch of the imagination, but, it's so comforting in some sort of way that I could see myself putting it on in the future.

It's getting a Criterion, so, I'm hyped for that.

I will say, my parents are happily married and have been for about 25 years I believe, so, I never had to deal with this situation.

I can imagine for someone who had to deal with their parents separating, this hits close to home. If my parents separated, I feel like this would be really high on my all time favorites list (spoiler alert, this actually might be on it anyways.)

What really makes this movie work is the fact that it isn't just for people that felt with the effects of divorce, it's for anyone who's experienced any sort of shift change in the world, it's for anyone who experiences something new for the first time, and isn't comfortable in their surroundings.

This, is in the way, the rawest and most honest coming of age film I might have ever seen.

Jeff Daniels and Jesse Eisenbergs are the big bright spots of this film, but, everyone gave a fantastic performance.

Also, if you are wondering, I actually do feel more for the dad. He's a flawed guy, OBVIOUSLY, as every character in this film is, but, he's sincere and tries his best, even when his judgement is way off.

The mom however, is a bad word I tend to not like to type out. She's whiny, manipulative and a liar, and it's kinda unfortunate that the film doesn't make her suffer as much as I wanted her to at the end- but, I kinda think that's the point.

This films simple message is that life is complicated, messy and things don't work out for the best.

Well, it kinda is.

Don't get me wrong, it's disturbing too, but, it's also kinda an honest display of the human condition that I for sure took something away from.

I guess that's kinda what I needed right now, so, thank you Mr. Baumbuck.

Grade: A (Quality of Chic Film A Sandwich)