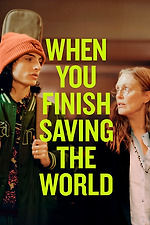 Update: the more and more I think about this movie, the more forgettable it becomes. Then I think of other movies like Rushmore that captured angst like this in a much more compelling way. Overall this is just a little too slight to make an impression on me, but it’s still an admirable film and what I’ve written about it that’s positive in this review I would still stand by.

"I wrote this song in Junior High when I had to say goodbye to my friends. Saying goodbye is techa hard."

I liked this a lot more than my mutuals on this site but let's just say When You Finish Saving the World weirdly resonated with me.

When You Finish Saving the World is a biting critique on neoliberalism and empty gesturing. Julianne Moore and Finn Wolfhard play two characters in completely different times in their lives but ultimately throughout the movie you start to understand that they are kinda the same in a lot of ways. Julianne Moore wants to live a life that has purpose and has a narrow point of view of work that she doesn't consider valuable. Meanwhile Finn Wolfhard wants the validation from the people around him since he is a micro internet celebrity- and believes he consistently needs this validation. So much of both characters is just empty gesturing. They just want fulfillment in some way.

This is beautifully illustrated in a sequence with Finn Wolfhard and the characters father at the dinner table when the dad asks Finn if he's okay. For a moment we finally see the character be vulnerable until we realize the dads intentions and it's a heartbreaking sequence.

Every character talks a bit like Jesse Eisenberg but what can I say, I'm a fan of the guy and I think he has a really sharp wit that penetrates this movie in a really enduring way. This isn't a coming of age movie like Lady Bird or even Eighth Grade- it's more slight than that. It's one that will make you squirm for other reasons that your typical A24 coming of age movie. It won't make you squirm because you are routing for the characters to succeed, but you are routing for the characters to not succeed. To understand their shallow selves and how the paths they are taking with their lives is one that won't give personal happiness. Sometimes, just writing a song because you want to or fixing cars is what delivers personal catharsis. Personal happiness looks different to everyone, as long as you are fulfilled and at peace having a life that is meaningful on a global scale really isn't that important.

I think at the end of the day, I understand why people aren't liking this. The characters are pretty insufferable, but I think insufferable in a compelling way. To see Finn Wolfhard's character just try to be interested in stuff and try to be more intellectual than he was just to present himself in a new identity is very identifiable to me. I think we get to a certain age where we want to become something- a new image but struggle to grasp what actually makes the people we look up to admirable? But also at the end of the day, if you aren't interested in reading a Kurt Vonnegut novel should you even give it the time of day, or is your path something different?