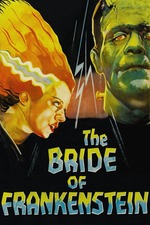 I've seen this movie countless times over the whole course of my life, and still it continues to astound me. On every viewing, I can peel back another handful of its infinite mysteries; another smattering of truth reveals itself. Bride may be a monster movie and a sly queer allegory and a wellspring of cartoon parody, but it's not just those things. No, it's also a tight bundle of emotions, ideas, and images that plays around in a genre sandbox while mordantly commenting on nearly every aspect of human existence. Birth, death, sex, marriage, loneliness: nothing is absent from this story. Frankly, rewatching it makes me shocked that it ever got made—not only in the 1930s, but ever. Perhaps the story's macabre exterior hides the extent of what James Whale is saying here.

So as to better get across what I'm talking about, I'll cite a couple things I only really noticed on this go-'round with Bride. First: that Henry Frankenstein's total lack of moral backbone is played as a sick joke. His fiancée-then-wife keeps warning him away from the experiments that almost cost him his life, and he initially goes along with her, but the second Dr. Pretorious mentions how fun a collaboration would be, he wavers. Throughout the movie, he insists that this is wrong, that he'll have no part of it, but as soon as Pretorious prods him, he's back to dirtying his hands with cadavers and lightning rods. He wants to be tempted so that he'll give in. Superficially, the film's "hero" recognizes that endangering lives in order to resurrect the dead is immoral, but deep down he just wants to carry out research.

The second realization I had involved the Monster, who doesn't even meet up with Frankenstein until 50 minutes or so into the movie. He is like an ember of pathos scorching his way through the film's fabric. It's easy to underestimate Karloff's performance, especially because it's hard to fully wrap your head around what's doing, i.e. playing a completely alien form of life. (Cf. Scarlett Johansson in Under the Skin.) No one can ever know what it's like to be stitched together, brought to life, tortured, persecuted, burned, and shot; none of us can really imagine the Monster's pain, confusion, and anger. But Karloff approximates it onscreen for us in those broad hand gestures and that lumbering gait. (The Monster could never play the blind hermit's violin, because his body's incapable of doing anything that precise.) Halfway into the movie, he adds a few spoken words to that emotive vocabulary, and it's startling because 1) he speaks them in Karloff's rich, deep voice and 2) we're experiencing it in real time as a living thing find a new means of interacting with his world, and that doesn't often happen in a movie.

I like to think and talk about movies where characters are born out of something that's wrong, with the perverse and the toxic bred into their very beings, and where consequently these characters can never find real solutions to their problems while they themselves still exist. My go-to examples are RoboCop and Safe, which are two of my very favorite movies, and it dawns on me as I'm writing this that those sensations might also describe my own experiences in the midst of depression, when it feels like the problem is intrinsic to who I am. Well, as I realize now, Bride of Frankenstein is another of these movies, and the Monster's "We belong dead" is his tragic acknowledgment of this fact. All of this makes his scene with the hermit even more devastating, because for a second there it feels like healing is possible. Maybe friendship can ease his pain. But of course the respite will end, because it must while the Monster is the Monster.

(The hermit prays with the Monster and speaks of God. Much of their time together is scored to trembling organ music. Could this movie, I wonder, possibly have been made in an era when religious faith wasn't a common, casual subject within mainstream filmmaking? It's especially striking since the rest of the film is so blasphemous, a contrast which amplifies that scene's power.)

I could go on and on about what I noticed during this viewing—about the set design's expressionist hugeness, or the outdoor shots' blatant studio set artifice, or the sinister, camp excess of Ernest Thesiger and Una O'Connor's acting—but mostly I just want to reiterate how much dark genius this movie fits into 75 goddamn minutes. How it turns any assumptions about life and death or good and bad back against the viewer; how it plays every one of its own plot devices for grotesque comedy and breaks my heart every time. I'm getting really excited to watch this movie again.