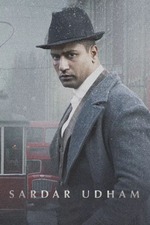 Interrogations into history - both personal and socio-political - are always subjective, colored by the very form in which people express them. One can choose to look at revolutions and tragedies forensically, excavating personal facts about someone's past from documents like passports, employment certificates, and other paperwork. This form of investigation is a detached one, governed most strongly by the desire to attain some form of tangible, understandable truth. The more personal methodology is that of interviews. Here too, though, the interviewee can choose to withhold or reveal as much as they want, allowing the interviewer or researcher a similarly dispassionate account of their (or their revolutions') histories.

Shoojit Sircar audaciously structures his latest film, "Sardar Udham," in a non-linear way that allows it to oscillate between documentary-style reportage and deeply personal memoir. The film's first thirty minutes feel like a schematic summary of what Udham Singh is most popularly known for. The audience gets brief glimpses of his memories, but primarily, Sircar restricts that direct emotionality. The proceeding hour further pushes away from directly engaging with the man at the center of the film, juggling between the various attempts made by British authorities to try and get access to who he actually is. Here, the audience, like the authorities, only sees his fragmented past that reaffirms what the police have found on paper. In other words, they (and we) don't know who he really is beyond knowing his political allegiances. Only in the film's concluding section do we (most elaborately) get the most impassioned look at his past, political fervor, and personality. It's almost as if his imminent death pushes him to open up about his life to one of the British officers, maybe in the hope that his role as a revolutionary will have some sort of lasting legacy.

This non-linear structure itself feels like a revolution against the standard Bollywood nationalist biopics that proceed from point A to B to C only to present its protagonists as deities for carrying out the government's orders in the name of the country or god or both. Sircar dispenses that narrow-minded depiction in the first thirty minutes that ends with what would ordinarily be the climax of this type of film. In doing so, he casually goes beyond making a simplistic revenge story about a man who kills for his country. Instead, he focuses on how this revolutionary operates at a critical historical moment when many revolutions were taking place, making Udham Singh a symbol not only for India's fight against oppression but for everyone who the oppressor oppresses. Throughout the film's middle sections, the director repeatedly shows Singh's associations with Irish workers, Russian compatriots, and British socialists to re-contextualize O'Dwyer's assassination as a symbol of Marxist solidarity vs. one solely driven by nationalist fervor.

Admirable as this structuring is in negating the classical template, it also acts as a deterrent to the film's narrative momentum. Especially post the film's excellent and unpredictable first thirty minutes, the middle section struggles to draw the viewer into its espionage-style narrative. Sure, one can argue that this is intentional because the protagonist de-personalizes whatever he tells the authorities. However, the amount of time the film dedicates to the British officers discussing these findings amongst each other is excessive to the extent that it risks sidelining the protagonist himself. Again, I get the intent to (semi)humanize them. However, Sircar's direction is too dry, too workman-like here, devoid of the cold/clinical detachment that would otherwise make these scenes feel horrifying.

There are intermittent flashes from his past life (notably, two lovely moments with Banita Sandhu) that contrast effectively with these scenes. However, the film did not work for me emotionally until its final hour. Initially, I did question its decision to dedicate the last hour entirely to depict the Jallianwala Bagh massacre, worrying that it might resort to easy sentimentality. However, because the rest of the film had kept us at such a distance from Udham Singh, his recollection of this final hour feels all the more personal, giving Vicky Kaushal the stage to beautifully underplay his character's horror and trauma.

The most remarkable part of this extended sequence is not even its depiction of the massacre itself, but Sircar's decision to extend what could essentially be a 2-minute montage into a 20-minute sequence. This scene occurs post-the-massacre when Singh tries to take the injured (many fatally so) back to the town for medical treatment. A horrified Singh first does not know how to react. Promptly though, he stumbles upon the corpses, trying to find people who are breathing. He finds some, puts them on a cart, and pushes them back into town. He does this again. And again. And again. And again. The audience knows that his love interest also went there and was (seemingly) fatally shot like many others. However, both Singh and Sircar refuse to restrict the personal to only Singh's lover. Repeatedly showing him help everyone else there solidifies the moment when every oppressed person becomes personal to Singh.

Why Udham Singh becomes a revolutionary, not what he did, is at the heart of the film, and its eventual transformation from de-personalized reportage to the protagonist's profoundly subjective recollection of his trauma, the means for conveying this.