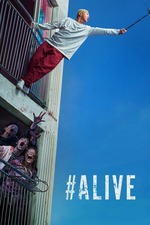 After the sequel to Train to Busan fell short of expectations, I was hesitant to go into another zombie film. While this film wasn’t a drastic improvement on what I saw from Peninsula, it was definitely better. I’m beginning to realize that I like zombie films that are based around a simple premise. Simplifying and scaling back something like that seems ridiculous at first, but this is much more of a personal story. That could explain why I liked Arrival as much as I did. Arrival centers around the perspective of one person, and it simplifies what is happening in the midst of a grand-scale invasion. The story did (unfortunately) begin to lose me in the second act, but it is an overall win because of the turn it takes in the third.

I found there to be so many fascinating elements explored here. We peek into human emotions and how we would handle something as simple as the loneliness that comes from hiding during an apocalypse. It also has a nice sense of focus. Let’s dive into why the story suffers a bit in that second act. The opening is strong, but the pacing slows to a halt when we are introduced to our second character. It’s definitely a sweet story, and it makes complete sense when we look at what he was going through, but there wasn’t enough happening that was interesting. It we step back and look at the story from start to finish, it really is something that could have worked better as a short film.

There just isn’t all that much to it. We still get the opportunity to explore the psychological state of Oh Joon-Woo, and it almost places us in that moment with him. There are also some inconvenient “things” that happen for the sake of the story (e.g., a character bumps into something to make noise only to add an extra layer of suspense for the sake of the plot). It was fine at first, but this happened more than once. The action is exciting-enough, and the intensity is built extremely well through the music. It’s an overall win for me, as these types of films normally resonate well with me. It isn’t one that I expected to be all that interesting, but it did surprise me. The end is cheesy and predictable, but the overall journey is worth investing in (especially if you like zombie films).