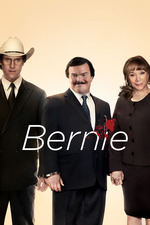 There are so many great elements at play here. First off, we have the brilliant guiding hand of Linklater. This cast is stacked. It isn’t just the main cast that does it, but these minor yet recognizable character actors come in and make a huge difference. Part Documentary, part scripted feature; Bernie feels fresh and original. Is it fresh enough to standout from the rest of Linklater’s films? That’s a tough question, as the screenplay here never quite kicks in or does enough to warrant raving about the film. It’s a simple film. Many will find it bland, but I believe that it’s an effective film. Sometimes simple yet effective is all you can ask for. In small-town Texas, an affable mortician strikes up a friendship with a wealthy widow, though when she starts to become controlling, he goes to great lengths to separate himself from her grasp.

Bernie is a fascinating character, and he’s an individual who everyone in this town loves. They may have their questions about him, but he’s done a well enough job of showing that he is trustworthy. When the time comes, it’s difficult for the town to turn on this man who has done nothing but good for his community. He clearly loves the town he lives in, and the people on it, but you slowly start to uncover some more selfish motives as we progress. The main highlight here is Jack Black. He completely owns this role, and it’s hilarious because he’s the opposite of what he normally is. He’s calm, reserved, gentle, and a bit scary because of that. He’s genuinely great, as are MacLaine and McConaughey (Jack Black is clearly #1). It’s a film built and carried by slick direction, great performances, and an interesting-enough script. The story never quite got there, and ending didn’t hit me as hard (emotionally) as it had intended, but it’s still a really solid movie.