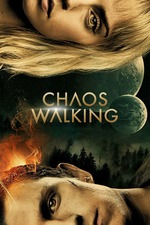 A dystopian world where there are no women and all living creatures can hear each other's thoughts in a stream of images, words, and sounds called Noise.

Tom Holland and Daisy Ridley join forces to portray characters in this dystopian world that must take a treacherous journey to accomplish a mission. The entire concept of “hearing and seeing their thoughts” terrified me, and the one clip released was poorly put together, so there was plenty of hesitation going in. Thankfully, there is a lot to like (regarding the first two acts), and the movie is structured in a way that doesn’t make it feel convoluted or disorienting. Doug Liman is a capable Director, and he does what he can here. The issue is less so the construction and more so the story itself. We get a fun backstory for both characters, and then we set off on this adventure that feels so by the numbers. There is absolutely no implementation of anything different or interesting here, other than thoughts being seen and heard out loud. Even with that, it wasn’t quite explored to its full potential, but that may be a good thing due to how jarring something like that can be for an audience.

The lack of character depth is a huge issue. Ridley’s Viola just doesn’t get a lot to do, and that may be the intention due to Holland’s Todd being the focus, but it would have helped to have something more for her to do. Give us something to latch onto, or just give us compelling character traits. Todd is the only character that isn’t riddled with cliché after cliché. Mads Mikkelsen is always great, but even his character followed the same predictable formula. What keeps the film from being a disaster is just the way it is constructed, but there are also a handful of moments that show the potential of this concept. These scenes were genuinely cool, and the fact that we have two compelling stars at the forefront will at least keep us somewhat engaged. Todd also gets solid character arc, and even though he is the only one, it is still compelling enough. Overall, Chaos Walking is a missed opportunity, but it isn’t quite as bad as many will expect.

🔙Winnie the Pooh♻️
🔜Sponge on the Run