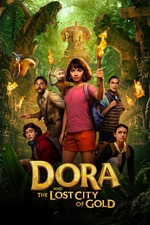 This is a movie that is getting relatively high praise from critics and that’s understandable. Honestly, Isabela Moner almost single-handedly got this to a fresh score. She rocks as an actress and brings every ounce of energy that she has to this role. It’s so hard not to fall in love with her (in general) and she was perfectly cast as an older Dora. From her awkward interactions to her offputting fourth wall breaking scenes; she kills it in this movie and almost made my frustrations go away. But I say almost because my frustrations were there and only got worse as the movie progressed. Clearly, this movie didn’t intend on making Austin Burke the world’s biggest Dora supporter and I know longtime fans are going to find this thing cool. What I found cool was the concept of sending Dora to school (that rhymed).

Her cringe-worthy (in a good way) interactions with her classmates ended up being the highlight of the movie. It was on the right track until about 20 minutes in. Then, all of a sudden, we get a montage throughout the next few weeks of school; and we start our adventure. Thus, the eye rolling begins and the second half of the movie kicks into full gear. This is when, even her ecstatic performances, couldn’t save where it was going. The story is un-compelling, predictable, lazy, full of lame side characters (except the parents) and holds some of the worst cgi of the year. I hear the argument of “it fits with the cartoonish nature of the movie” but it still took me out of it. Even with this lighthearted tone, a better narrative could have saved the experience. Everything was fine until we shifted back to the jungle.

The “end goal” was also lame. What really got me was the horrible filmmaking. No one seems to be talking about how bland the cinematography and how choppy the editing was. Sound clips would be played at awkward times, voiceovers would be made far too obvious and certain action scenes (cave water slide for example) had about 20 cuts in 10 seconds. It became jarring. Obviously, you don’t go to Dora to find an Oscar contender but to be that lazy, while your lead is working her butt off, is upsetting. Like I said, there are things to love. The references to the animated show work well, her quick thinking is showcased well and her fearlessness makes her a great leader. Overall, Dora’s charm will win many over and it almost did me. The movie is worth watching just to see her shine.