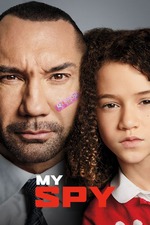 This has been a dry week in terms of movie-watching, but I’ve spent the majority of the week rewatching one of the absolute best shows on tv. Everyone check out Dark on Netflix. As far as this movie goes, the trailer and I have had many battles over the past year. I saw it (not kidding) in front of every major release when I watched movies at my Cinemark. It played consistently for seven months. After multiple release dates, My Spy finally got a streaming release here in the states. Bautista either gets his version of The Game Plan here, or he could end up on the unfortunate side, with a film like Playing With Fire. I honestly don’t mind The Game Plan at all. Even though it features plenty of cringe-inducing moments (stop with the fortnite dances), there are all kinds of of heartfelt moments that make up for the sloppiness of certain storylines. My least favorite aspect of a film like this is when it just feels like writers have no clue how kids interact.

The conversations between the kids, while limited, are terrible. Multiple conversations throughout the film are poorly executed, but it’s mostly just the writing to blame. The acting is solid. If you can manage to look past those rough moments, and take the film itself at face value, then I believe there is enjoyment to be had. Bautista is great, and he even gets a chance to show off his tougher side. The film is surprisingly violent for a story that feels like it should be PG instead of PG-13. The real key to victory here is Chloe Coleman. She elevated what could have been a boring ride, and her on-screen energy is great. She has plenty of room to grow as an actress, but she deserves a ton of praise here. Her chemistry with Bautista’s JJ allows the film to do what it ends up doing. It’s a typical story, and the predictable nature of everything doesn’t allow the ending to stand out in the best way. You get (literally) everything you expect when you go into this film. It doesn’t come together as a concrete winner, but there are enough small victories within that families will love.