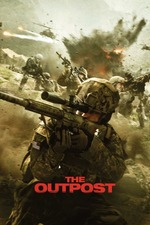 So I am genuinely as surprised as anyone reading this with my score. As I said last night in my review for 1917, I love War films (if they are well-made). I will admit that this movie is a bit sloppy at moments. The “style” of it feels a bit jumbled at points, as we are being introduced to (literally) every character. There is a sentimentality in that, and it’s nice to see, but we could have done without certain elements. I also needed to see some more character-depth. I will defend 1917 every day of the week, but there is no denying this film needed work in that department. What floored me here is the story. The (true) story of these men who were faced with the most insurmountable odds, and then the fact that the entire third act is an exciting/bloody battle.

The premise is simple: A small team of U.S. soldiers battle against hundreds of Taliban fighters in Afghanistan. We get introduced to the main players with what is the most random cast of 2020. Oh hey it’s Scott Eastwood. He’s normally so-so, but he embraces his character here. Orlando Bloom is going hard with his accent, which is funny, but it actually worked well. The real star of note here is Caleb Landry Jones. His performance is genuinely awesome, and he manages to deliver on some of the best emotion I have seen this year (no joke). Could we have learned more about why he feels this way? Sure, but more character development means less “pow pow” with the guns. Austin likes the “pow pow.”

Sorry, I’m typing this after drinking a monster. I did actually love the action here. It’s clearly a low-budget film, so I’m obviously going to be a bit more lenient here, but it’s still great. The idea that “this is it” for all of these men is present, and it’s actually terrifying. We don’t know who to actually trust out of those that they are working with, and we’re in the dark on why they were placed there in the first place (for awhile). It’s just an extremely simple film, but I love how it never tried to do more than it had to. I may be the only one who feels this strongly, but I think The Outpost is a pretty good (and emotional) time. Rod Lurie did enough here for it to overcome its obvious flaws, and the cast was able to turn in some fun performances. Once again, the fact that this is a true story is mind-boggling.