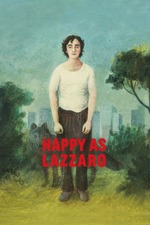 While the queer narrative and the carefully placed analogies are hewn out of Biblical references, Happy as Lazzaro transcends the realm of symbolism and weaves a startling, semi-realist chronicle, universal in appeal. Rohrwacher draws inspiration from her own upbringing in rural Umbria and that folksy, homespun feel is sprinkled all over her cinema. Happy as Lazzaro even though anchors it's chassis at rural Italy, harbours a global message and captivates one with sublime use of cinematic antecedents.

The pastoral mien in Happy as Lazzaro with rolling fields and grazing sheeps renders a bygone era. The story begins rolling at Inviolata, with peasants living unadorned and credulous lives labouring in the tobacco farms during days and serenading the equally hardworking and naive women in the night. The lands are owned by an overweening and dictatorial Lady De Luna who accompanied by her assistant Nicola, whose guileful wiles persuade the peasants into living in the frowzy hovels in exchange of the crops, has secured an undisputed dominance over the territory.


Lazzaro, embodiment of honesty and purity is one among these villagers who is at the bottom of the food chain. He is bullied, exploited yet manages to retain his radiant smile, his placid, coarse haired and angelic eyed appearance itself is alienating but distinctly bewitching for a viewer. Beguiled by his warmth, Lady De Luna's manipulative son Tancredi befriends Lazzaro and plots a fake kidnapping to swindle his mother a fortune. Their camaraderie is an absolute joy to watch but soon the police gets involved and cognizant of the impoverished, enslaved people and the ugly scheme of things, alert the authorities.

The first half of the film was all about realism but the second segment dwells into a satirical or fantastical milieu with the same characters now grown old, defeated and barely surviving in the city's underbelly and Lazzaro, exempted from the process of ageing reconciles with them. Accompanied by regular harrassment and bullying, he is the only victor in the system while others make ends meet for bare survival. The harshness of life has hardened everyone except Lazzaro, he is way above the humanly instincts, abusive authority and continuous humiliation couldn't outweigh his childlike holiness within. The perpetuity of the characters continuously wrestling with an oppressive system, first with feudalism and then with metropolitan injustices speaks volumes regarding Italian class divide and epitomizes the catastrophic fall of society. During the climax Rohrwacher takes a sharp turn that ensues the debate over the true relevance of innocence in modern world, her poise in handling such intimate yet enigmatic saga with a striking balance of firmness and subtlety is remarkable.