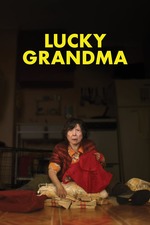 I think if they'd have called it anything else I'd feel less cheated. Everything I saw about this movie before watching it would have one think this is a dramedy with a grandma who scraps with gang guys and ends up lucky somehow in the end.

Spoiler, she doesn't end up lucky and no one learns anything and it's a little frustrating when reflecting on how I felt at the end of the movie, which was, "huh?!" It felt like the last half of the movie was not as thought through as the first, maybe.

That being said I'd still recommend watching it for Grandma, Big Pong, and some sweet dance moves.