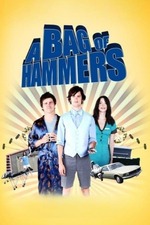 “A comedy about good times and grand theft”, reads one tagline of A Bag of Hammers, at once promising three things of which but one is delivered. Following the exploits of a pair of grifting man-children, played with reasonable repartee by Jason Ritter and co-writer Jake Sandvig, it’s a film with mature thematic aspirations to contrast its juvenile protagonists, attempting with its story of a neighbouring child who they—through a series of plausibility-stretching events—come to care for to enact a charming story on the process of maturation. Even putting aside the sheer ludicrousness of A Bag of Hammers’ plot, its flaccid yearnings for laughs earn exhaustingly few returns, leaving it a mostly witless time spent in the company of mostly unbearable characters. Its painful conviction of its own importance and misguided belief that these people make for interesting and likeable protagonist renders this a hopelessly unaware experience, and a profoundly dull one to boot.