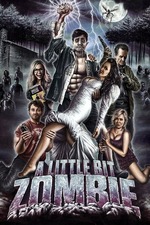 Beginning with promise as it establishes two different story strands, respectively resembling Left 4 Dead and Evil Dead II, it’s not long before A Little Bit Zombie exhausts its potential, the efforts of first-time scribes Trevor Martin and Christopher Bond to craft a fresh horror-comedy falling flat almost upon the first step. Concerned primarily with engaged couple Steve and Tina as they take a short pre-marital vacation with friends in the family cabin, it sees the former infected with a zombie virus transferred by mosquito, a smart little conceit that facilitates the bulk of the reactionary comedy at Steve’s sudden undead inclinations. Sadly, it’s material enough for only a short film at best, and with little else of worth to bring to the table Martin and Bond stretch their debut beyond salvation. The script’s troublesome depiction of the bride to be hardly helps; A Little Bit Zombie is one good idea lost amidst many bad ones.