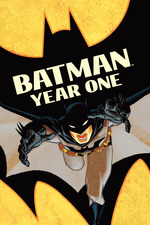 Released a year on from Under the Red Hood, and thus tasked with discerning itself not just from Nolan’s films but from its animated predecessor too, Batman: Year One returns to the roots of the character and joins him in his earliest experiences on the job. Somewhat misleadingly titled given its strong focus on Jim Gordon as he first arrives in Gotham, the film’s smartest move is the casting of Bryan Cranston as the commissioner-to-be. Less smart is the film’s lacklustre pacing; at just 64 minutes it rushes to tell a considerably tense, character-driven story, resulting in uneven pacing particularly in the ill-conceived opening act. The lack of a memorable villain is a further hindrance, rendering Batman’s side of the plot essentially throwaway and leaving the viewer desperate to return to the exploits of Gordon. Squandering the potential of Frank Miller’s reputedly great graphic novel, Year One is a disappointingly muddled take on the Dark Knight.