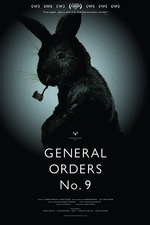 An abstract documentary on the evolution of urban civilisation in the state of Georgia hardly sounds like the most alluring of viewing experiences, yet such is the slow-building power of General Orders No. 9 that by the last of its 72 minutes it has the viewer encased in a shell of fascinated wonder, transfixed by the strange majesty of its hypnotic approach. Cyclically structured, the essay film uses the development of Atlanta as the paragon of modern human evolution, employing an entrancing Southern drawl in voiceover readings of writer/director Robert Persons’ poetic arguments. Its hauntingly ethereal and eerily omnipresent soundtrack accompanied by a host of stunning images of the city and country both, General Orders No. 9 overwhelms with a combination of visual and aural seduction, Persons building his argument slowly and steadily, gradually inviting us to question where not just Georgia stands in the world of today, but where we all do.