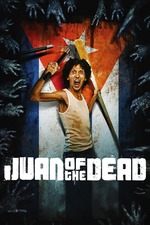 Horror comedy ain't easy, but when done right it works so wonderfully well. Juan of the Dead proves both parts of that statement, its failures often showing the pitfalls of the genre hybrid, its peaks (more often) attesting the great things therein to be had. It's a film at its best when unafraid to take its characters in shockingly amoral directions: a makeshift posse who charge people to have their zombified loved ones killed, Juan and company at one point leave an old man to the horde so that they can use his wheelchair to transport their beer. It's such audacious humour that allows the film's satirical social comment to be passed; this is hardly a great portrait of contemporary Cuba, but there's enough in its cultural analysis to make it more than just a silly comic romp. Some lacking production values hinder the suspension of disbelief, yet with so much in the way of horrific hilarity, that's a forgivable transgression indeed.